Who was that Brave Hero???

We're at the dock! Again.   Its still wickedly windy out there with 25 knot winds and we are scheduled for an in water insurance survey, doesn't seem fair to send poor Andrew up a 65 ft mast in a churning, rolling , swinging, salt sprayed anchorage, so we're on the dock at Village Cay Marina in Road town, Tortola, BVI.

Thanks to Gord's vigilance in always being on top of the maintenance, we had few issues and those were expected. Flares and fire extinguishers that are out of date and a couple of small things like our tri colour light at the top of the mast, which is in its package waiting for installation.  The surveyor, Andrew,  even complimented Gord, saying he was unable to find a single rusty hose clamp and those usually abound on all boats.

So, we went to sleep feeling really good about our safe, well maintained winter home.

At 3am , all hell broke loose.  Horns kept blasting till everyone in the Marina was awake and on deck. On the shore edge at A dock is Spaghetti Junction and a strip joint that was hot that night.

In fact it was shooting up flames over 3 stories high, filling the whole area with thick dark smoke and showering a rain of sparks over the boats in the marina. Now, fiberglass is highly flammable, not to mention it melts fairly easily, so all the boats in the path of the sparks were letting go there lines and heading for the harbour.   Did I mention there were 25 knot winds and a rolling, churning, swinging anchorage out there and now it was crowded with everyone trying to drop an anchor in the middle of the night in pitch dark frothy waters. 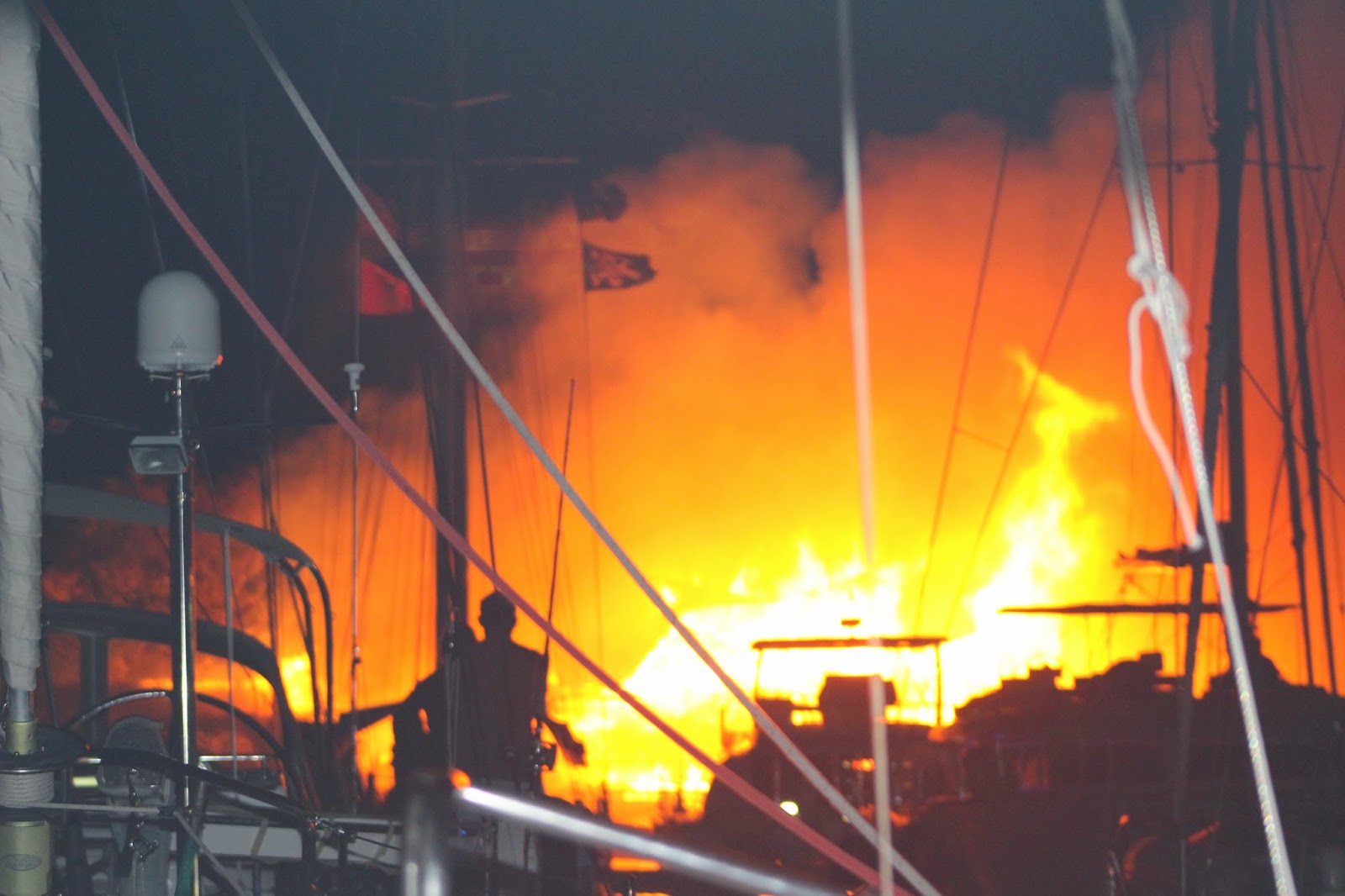 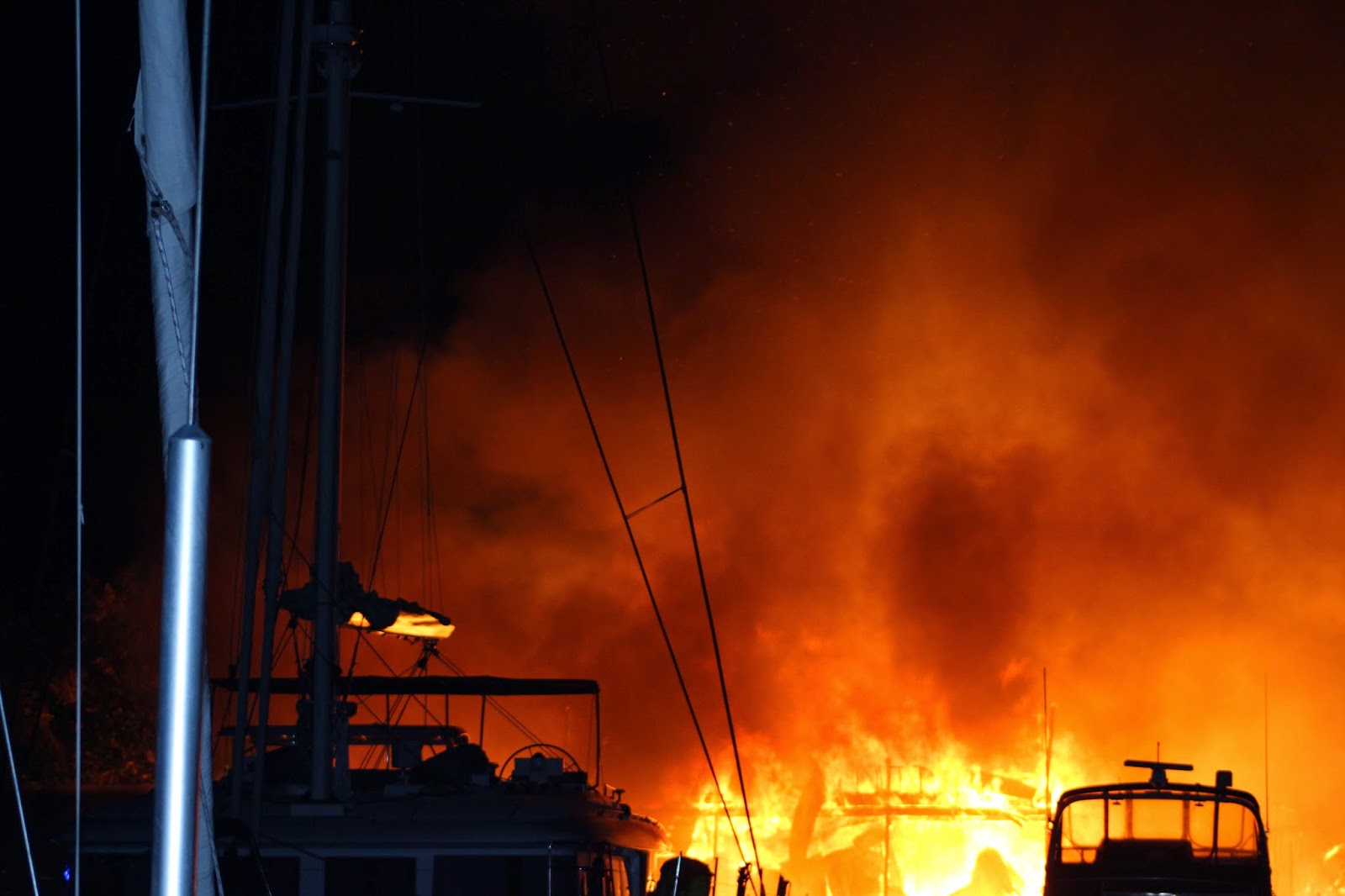 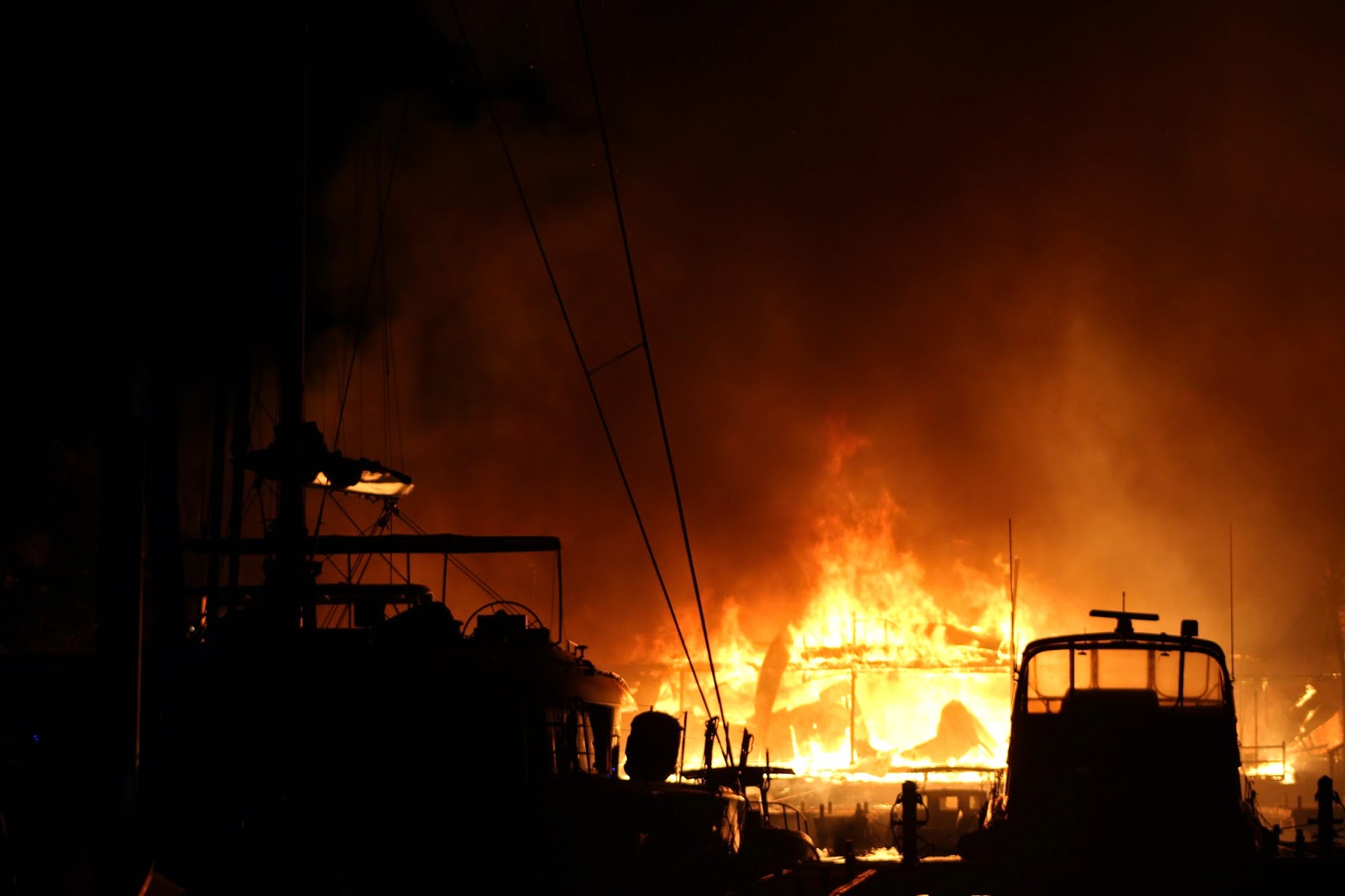 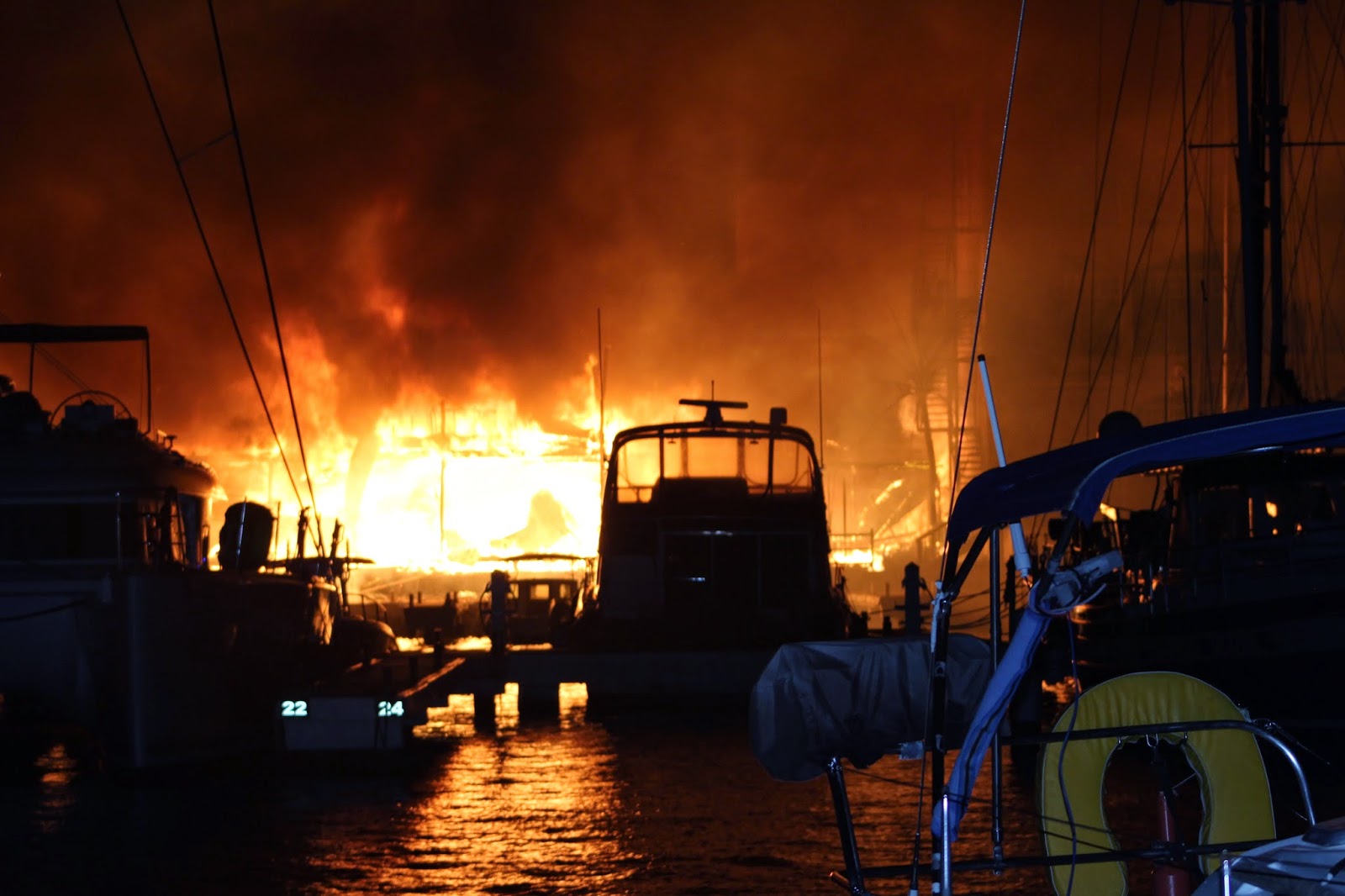 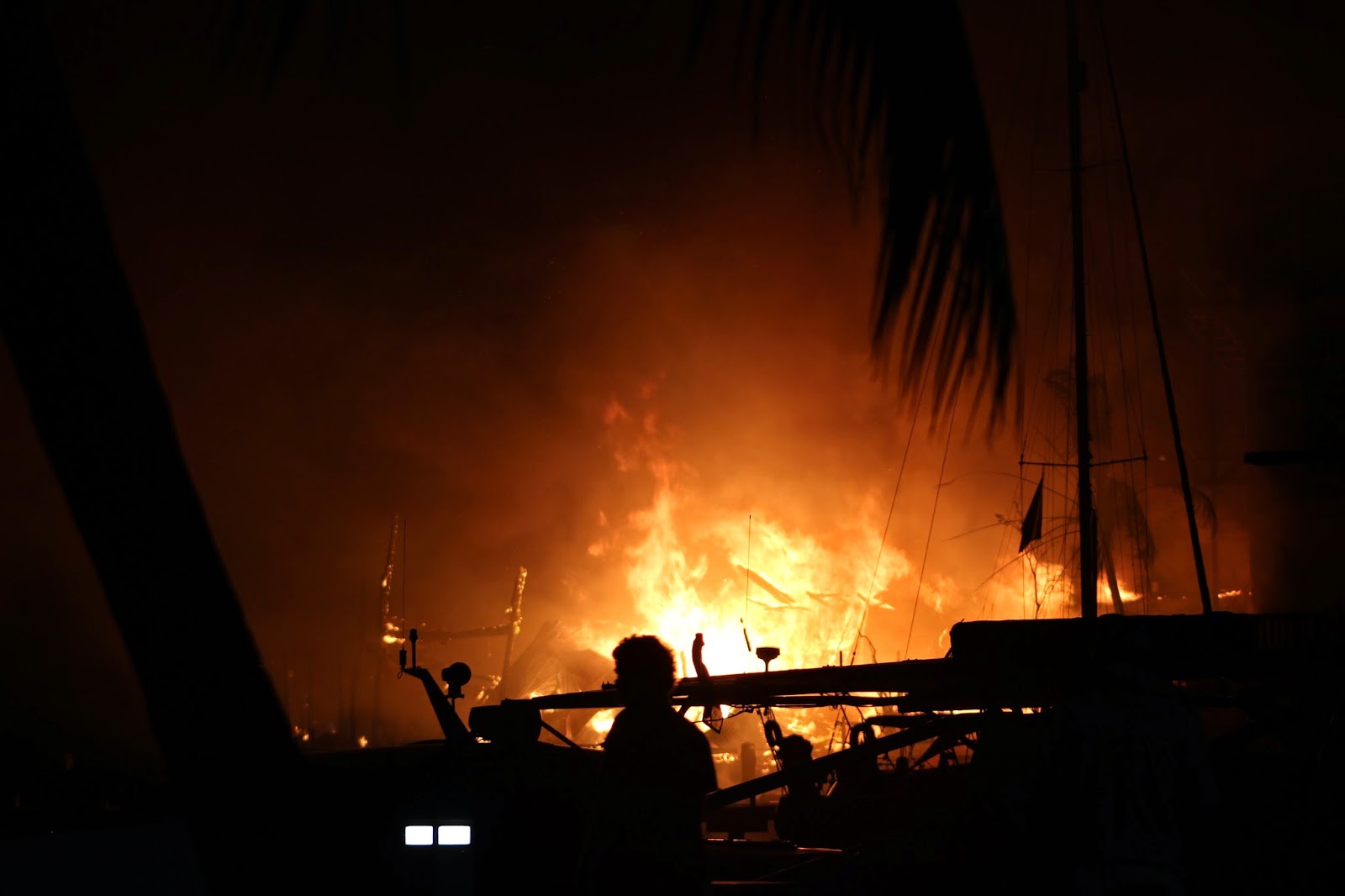 We were lucky, we maneuver like crap, so we always insist on the end of the dock and we were out on B dock out of the path of the smoke and the sparks. We readied our lines just in case but stayed put while they fought the blaze and luckily did not have to move.

Those that stayed, were stomping out sparks, taking pictures or hosing down boats.

While videoing, Gord caught sight of a lone man in a dinghy, with his hoodie pulled over his head.
He headed into channel A directly in front of the fire, cut loose the lines on an unoccupied catamaran that was already starting to burn on the rear pontoon and backing up his dinghy, he towed that boat past the flames and out to a safe mooring. Then he put out the fire on the back, jumped back into his dinghy and disappeared into the night.
﻿﻿
Gords video of the fire and the Hero in the dinghy

Who was that brave Hero???