Back to the Boat

Man am I tired, I think I slept for 3 days when I got back.  Felt more like the wheels of Justice ran right over me.

Thanks to Carl and Leslie who entertained Gord once again while I was gone.

With what the weatherman predicted as a Huge North Swell coming, we decided to head for Lamshur Bay as a protected anchorage to ride it out.
As we pulled out of Brewers, we heard Tom & Megs on the radio, hitting the fuel dock at Crown Bay, by the time we got thru the channel, they were done and we were right on their tail. They had the same plan, so we spent 4 nights snorkelling, hiking and trading off making dinner.  Just a pleasant happy way to watch the huge swells out on the ocean as they went by our quiet anchorage.


Our hike took us to the VIERS village ( Virgin Island Environmental Research Station)  which was home to the Textite experiment in 1969.  They wanted to see how astronauts would deal with confined spaces and close quarters in future space travel. 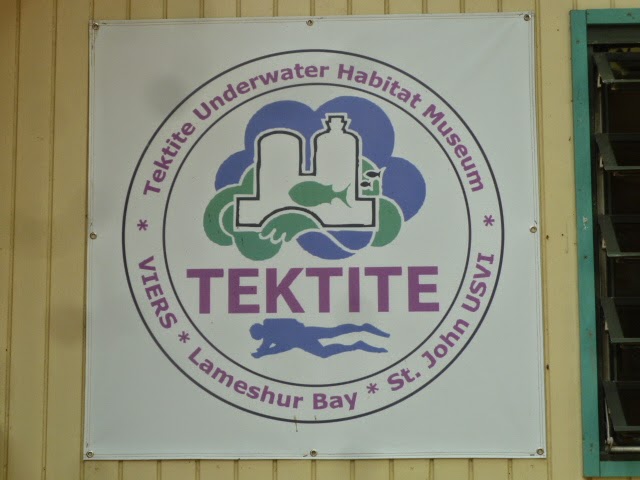 Two, 2 story adjoining capsules were developed with living, cooking , storage , work and laboratory space  for six aquanauts.  These capsules were sunk to the bottom of the bay at Lamsur and several sets of aquanauts, including an all female team spent months down there living and working. 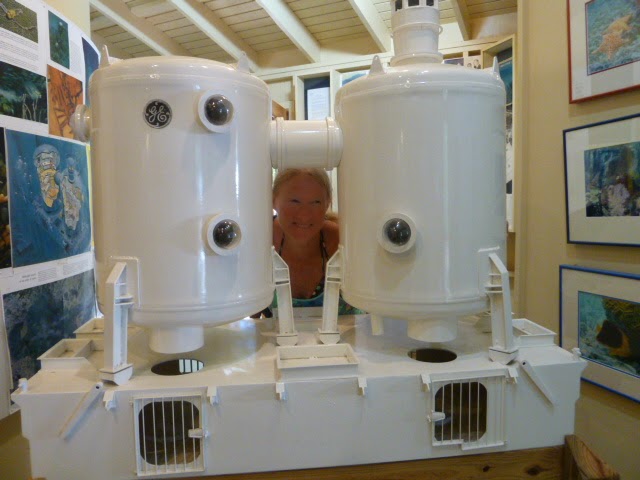 They learned a lot that was implemented in future space travel.

As luck would have it, we happened to hike there on the day they were holding their 40th anniversary celebration and there were some of the original aquanauts and some of the students that were there at that time, giving talks and explaining about their experiences.  The museum was open and we even got a free lunch. Not bad for a hike on a remote trail that looked like it led nowhere but more mangroves and rocks.  It also explained all the weird structures that we saw  attached to coral , rock and ocean bottom when we snorkelled the area. 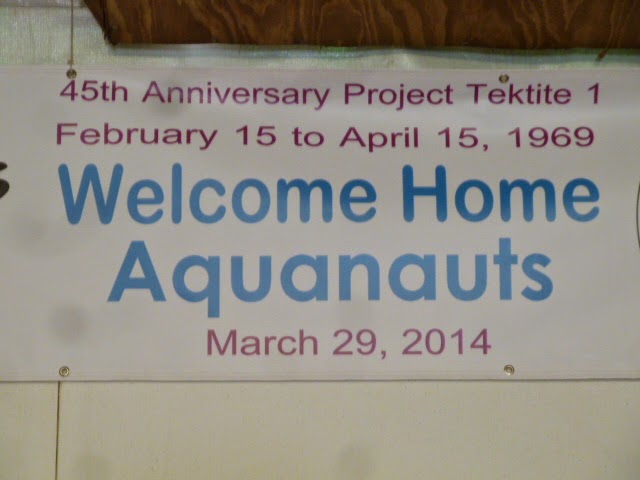 
When the swell subsided, we headed to Maho, with the intention of taking the ferry back to St Thomas to pick up our new Amsteel line that was being shipped in.
As luck would have it Tom and Megs had dropped their guests at the airport and were heading back our way and offered to grab our parcel and deliver it, saving us a long hot day on the ferry.

So of course, I did dinner and she provided the rum for the rum tasting contest.
Posted by Gord and Sue on Ocean Wings at 11:05 PM