I'm going home and we're both going to be alone.  Leaving your boat , even if for a short stint home, is accomplished with great anticipation and regret, all at the same time.
I had to go home for the final culmination to that ongoing legal fight that I've been having with the crooked partner that I aquired when my late husband , John passed away.  I headed home, knowing I needed to be there to look those judges in the eye, happy that I would be seeing my daughter Tiffany and grandaughter Sadie, but sad to leave this beautiful laid back lifestyle and of course Gord alone on the boat and wondering how it was going at home.
I prayed only that the judges would see the truth. I have to say I do not have enormous faith in our legal system. It gives too many rights to the bad guy - shouldn't their rights be forfitted when they break the laws of our land. Its so disheartening that they can break the law, then those same laws allows them to not only hide behind it, but use it to keep victimizing the innocent.  When is enough, enough and the victims rights are put front and centre.
Hundreds of thousands later, justice finally prevailed, the appeals court panel saw the truth and put an end to the bleeding. I won, I won, I won!!!! It felt like the weight of the world was off my shoulders and I slept well for the first time in years.
Another thing screwy about our legal system is: I have my judgement, but now its up to me to hire more lawyers to try and collect, no assistance for the courts, no freezing of assets and no direction to the guilty party about paying up.  Kind of sounds like a make work project between the judges and the lawyers to me.
What's truly scary about our  """justice system""" ( I use that term very loosely) is that is so expensive due to the crazy amount of legal paperwork required, that apparently no one reads and the loop holes allowed that an average, hardworking taxpayer could probably not afford "justice" in any form.


Back to the boat, Gord was alone and managed just fine to move from harbour to harbour several times by himself. I wish I had been there to see him run between the cockpit ( 40 ft) away and the anchor at the bow. alternately putting the boat in forward, running up and upping or dropping the anchor , then back to put it into neutral or gear, whichever. Quite a feat!  I'm proud of him! 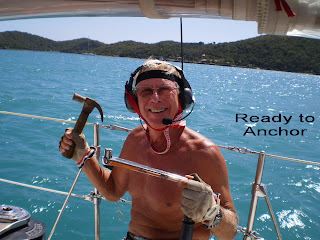 Posted by Gord and Sue on Ocean Wings at 6:49 PM

Add comment
Load more...
Newer Post Older Post Home
Subscribe to: Post Comments (Atom)
Sailboat owners Gord and Sue aboard their 55' Whitby Ketch "Ocean Wings" share their adventures and travels as they start their retirement, living their dream of seeing the world from oceanside.
Ocean Wings is a recent purchase and our first foray into the Sailing Lifestyle. We're excited and a little scared. Join us in our adventure.