We're like a little caravan, Tom and megs are early risers so they headed out first, then Carl and Leslie  and last but not least Ocean wings by the crack of noon.   Were fast so it was aquick up and pass Frolic and then catching up to Tom & Megs on Alpha Crucis.     ﻿

Culebrita was a rockin and rolling( surf wise) so we headed into Dewey on Culebra. Once we  all arrived we  celebrated happy hour and dinner at the Dinghy Dock bar, known as a cruisers hangout.
Customs check in the next morning was the most long drawn out affair that it could possibly be. They simply have one speed for accomplishing everything.  Slow, slow and even more slow.
Once we'd paid the requisite $35.00 cruising fee, we headed out to snorkel off Luis Pena Island.
﻿


Surprise , surprise, even on this quiet, sleepy little Spanish island,  harbour TV still flourishes.
Caribe Spirit a day charter power cat with about 30 tourists aboard, grabbed the mooring ball next to Tom & Meg. All 30 tourists jump in the water and while they're splashing around, the tour boat gradually drifts away.

Now that is not supposed to happen on a mooring ball. The whole idea is that you're supposed to stay put.
When the guys onboard finally look up, the panic starts.   Whistles blow, arms wave, everyone shouts at once and swimmers make a mad swim for their tour boat.  As they scramble aboard it becomes very obvious that they are still attached to the ball.  The problem is that the ball is no longer attached to the bottom of the ocean.  Whoops!!!!  Could be that they're just a tad too big and heavy for a mooring ball. 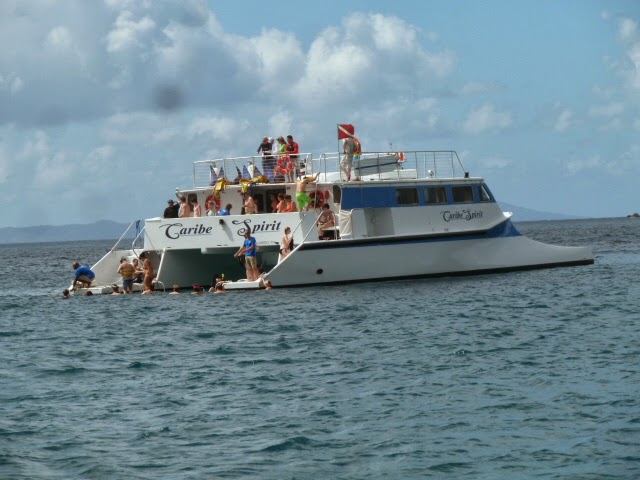 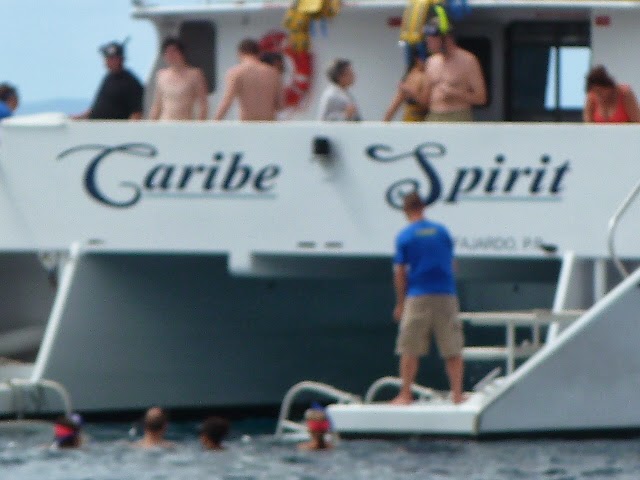 The truly sad part is that they just cut the ball loose and let it drift out to sea, rather than own up to the DPNR ( Dept of Parks & Natural Resources) that they had literally pulled it out of the ocean floor.

Not sure I want to trust my boat on a ball after they've been around!

Surf has died down , so over we go to Culebrita. the Puerto Rican Navy is everywhere ( that's our name for the power boats the Puerto Ricans favour over sailboats) and they're all stern tied to shore in a big long line.   I think they love power boats because they have large engines and loads of battery power so they can each blast their stereo, belting out different music, to see who can outdo who.
About 10 minutes and I've had enough.
But its sunday evening, so they head out toward dusk and the sailboats reclaim the bay.
It has to be the most gorgeous white sand horsehoe shaped beach I've yet to see, with a great hike up the lighthouse ruins. 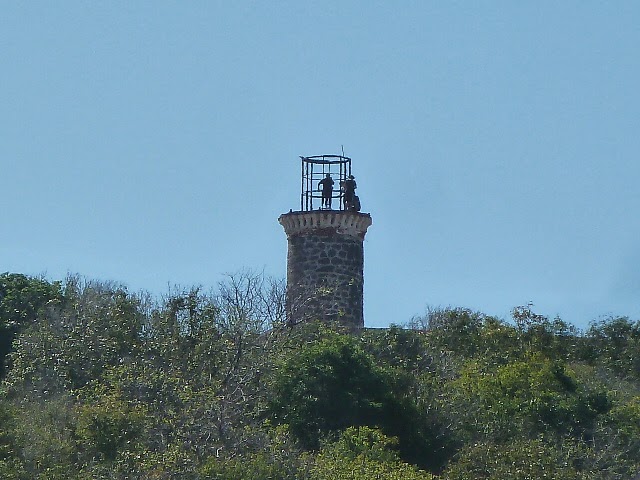 The snorkelling is great and the Jacuzzi, pools are awesome.

Time to try the new lobster trap on the shallow reef here and we are the last boat backed up to the reef.

While we're sitting with Tom & Meg chatting over dinner, a dinghy comes out of the dark from behind our boat.   How curious, there's nothing but reef back there.
And our lobster trap!!!! Oh Oh!!!

Next morning, the ball is on the rocks with the line cut and the trap missing.

I'm appalled!  a boater stealing from another boater.   We suspect it was the people on a Lagoon 380, flying a colourful windsock type flag, with red boat lettering ( which was obscured) on the top step riser of the starboard side. They looked very sheepish when asked if they had seen anyone take our trap.

Be on the look out for that unique stainless steel lobster trap if there are any Lagoon 380's in your area.
Don't forget to lock up your stuff!
Posted by Gord and Sue on Ocean Wings at 9:26 PM