Not only did I see my first shark, but that sighting was followed the next day by a second and then shall we say a partial third.
The Indians are a series of large rough rocks just east of Norman Island, with some of the best snorkeling in the BVI's.  While snorkelling there, I was busy snapping pics of the little fish when a 4-5 ft shark over took me from behind and swam about 5 ft under me. I had no time to either panic ( which I thought I would ) or snap a pic before he was gone. 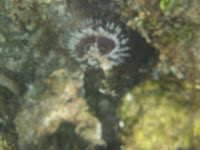 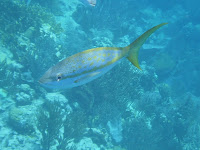 The following day in just off the north side of Norman Island , outside a beautiful calm anchorage in Benures Bay. I spotted my second shark. He was in 15 ft of water , at least 10 ft long and havin' a snooze on the bottom. His size caused a few heart palpitations, but when he didn't move I calmed down long enough to grab Gord and frantically point. We kind of edged away slowly and kept a good eye on our path of retreat, just in case.   ***Watch the next post for Gord's account of his unmasking****
Now, what enemies do sharks have? Or, what eats a shark ( besides man of course)  In Great Harbour on Peter Island I spotted a shark head and several long ft of what used to be the rest of him. The snout, with eyes was very large, so I deduced that at some point he was a very big fella. So, what got him?  I was not sticking around to be the next meal . I high tailed it out of there.  I tried to get a pic, but the water that day was stirred up and they didn't turn out. Shall I venture back and try again?  Would You?
Posted by Gord and Sue on Ocean Wings at 10:43 AM