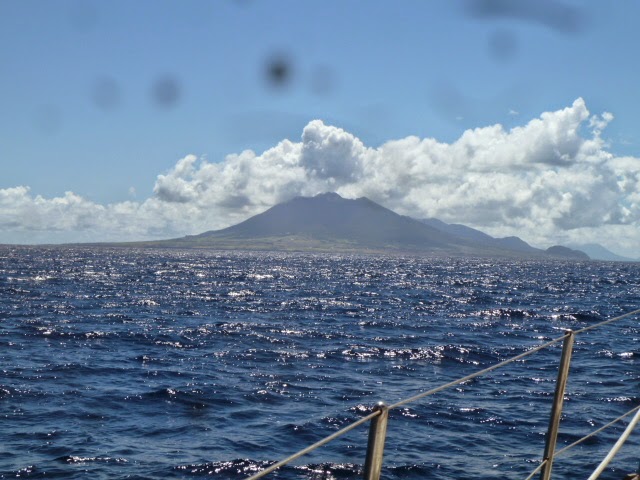 We can see St Kitts from our anchorage in Eustatia. Just a three hour sail away. With Mizzen and Jib sails up we had a beautiful sail at 7-8 knots

As we sail down her coast the most notable landmark is Brimstone Fort, perched high on a volcanic outcropping watching all those who approach. 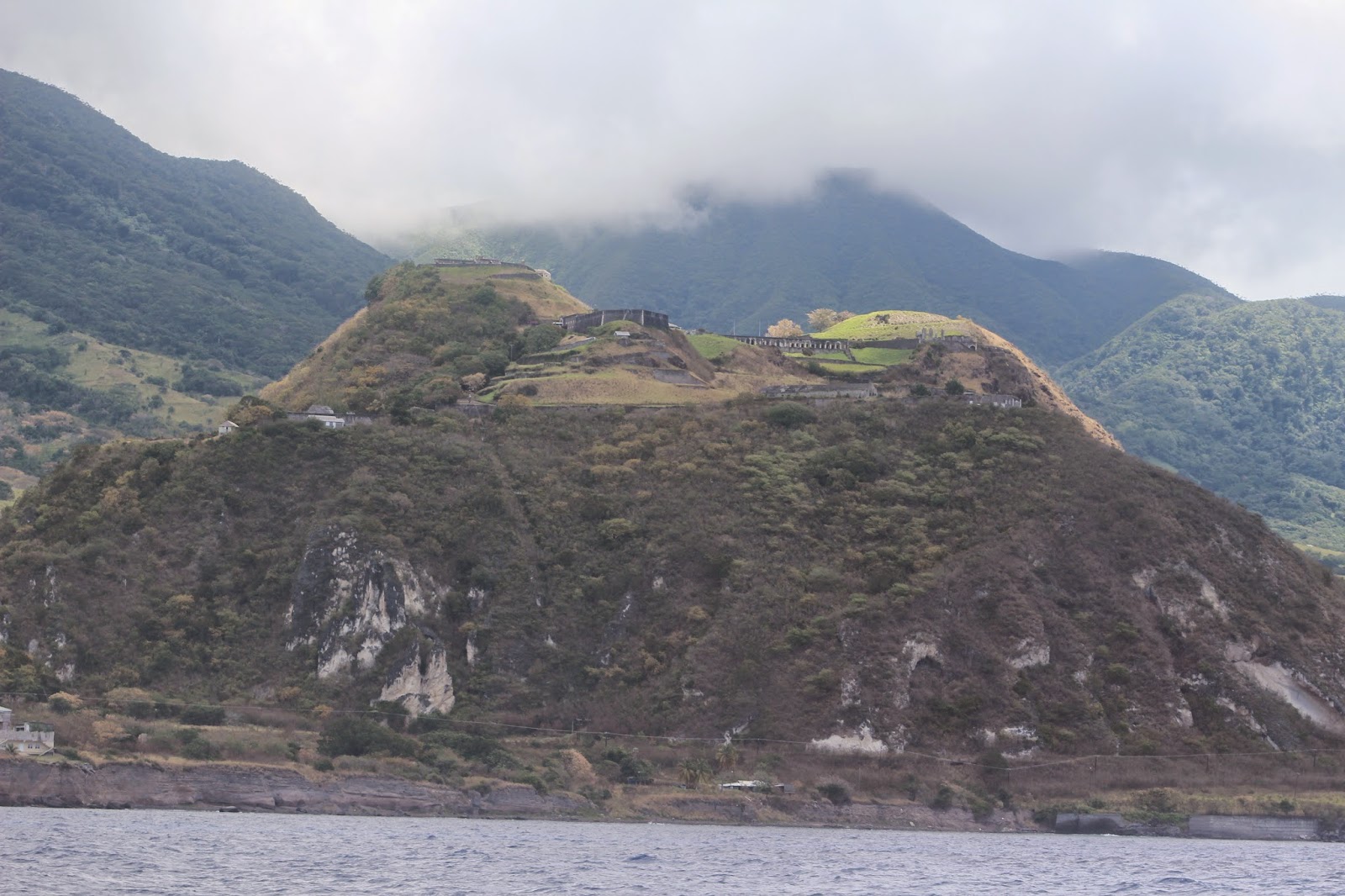 arrived in Bassterre and headed to Customs and Immigration.


Very friendly Customs people, but they have this weird way in the Caribbean of putting the different components of Customs and Immigration in totally separate buildings, so it's a bit of back and forth to get it all done.  Couldn't find a courtesy flag, so got busy and made my own.﻿

There is a fairly new marina with a dinghy dock, however they have left some very large rocks sticking up out of the water right in the dinghy channel, so the only way to get your propellor safely past is to cut the engine, slide along any other dinghy's and use your paddles. Why, they did not blast out these for a clear channel is any bodies guess.
The marina literally has no facilities, not even fuel or water.  To get Diesel or Gasoline, in Eustatia it must be jerry jugged from whatever gas station you can find that might carry Diesel, and for some reason on an island that depends on boats for travel and boats for tourism, they almost hide their Diesel away. Without a water-maker, you're dependent on jugs of water or conserving until you get to an island with dock facilities.
We decided to rent a car to tour the island and in particular Brimstone Fort.
﻿


This is the largest Fort in the islands and is perfectly intact and being carefully preserved. 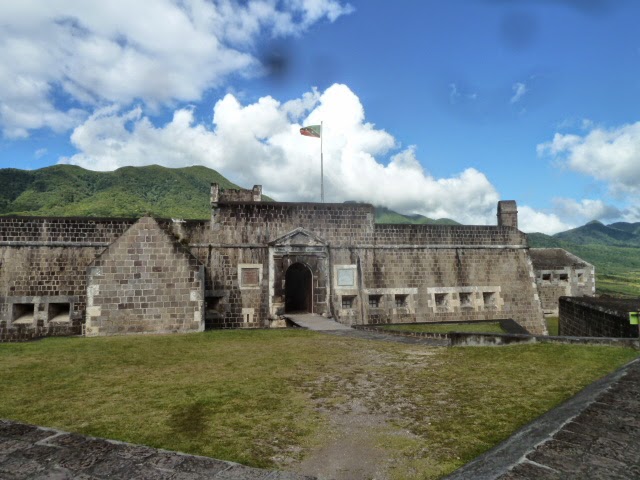 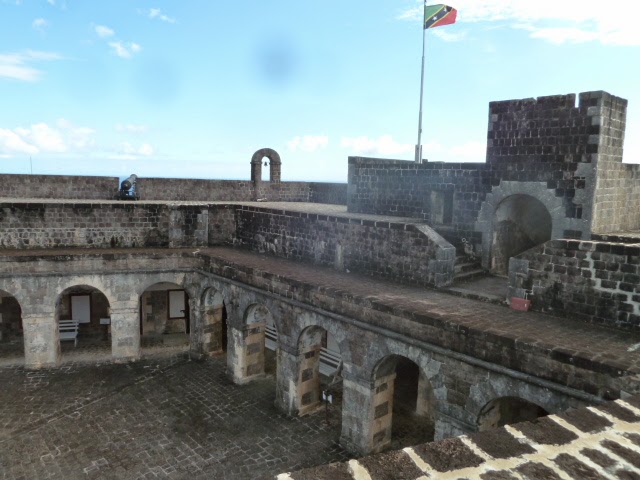 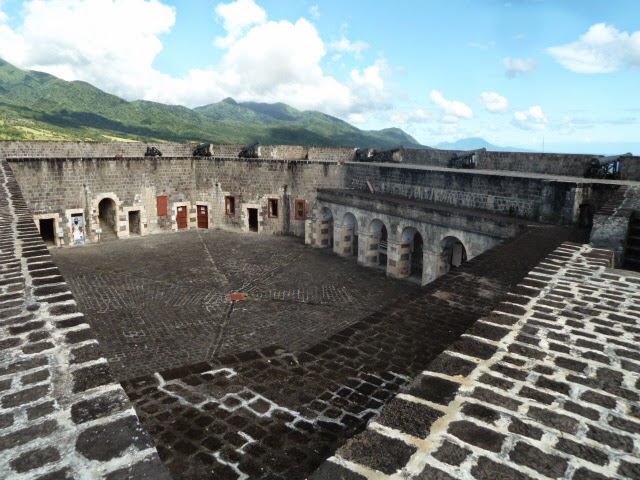 ﻿
﻿﻿
It is situated on top of a large promontory that just seems to jut up independently out of the island and affords a 360 degree view all around. Must have been awesome  to look out to sea and watch an enemy ship approach.
It's said there is a ghost, marching in his boots and uniform,  that haunts the barracks building, but try as we might we could not catch a glimpse of him, maybe it's just a ploy to keep the tourists interested.

This island also has a volcano, but we opted not to do that hike again. We'll save it for Montserrat, which has a more active volcano. 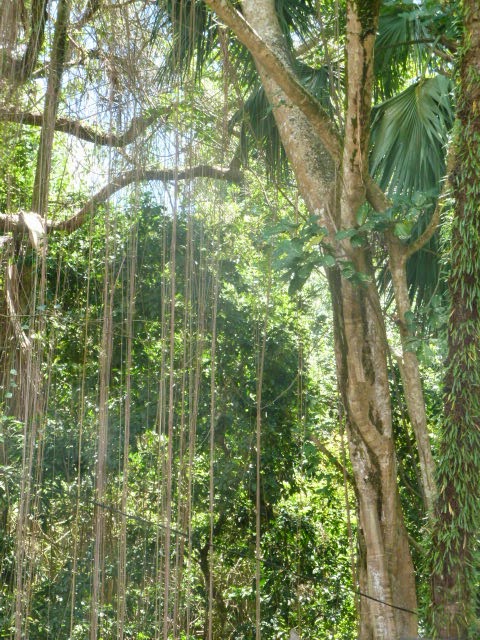 We played in the rainforest and visited the site of an old rum mill, where we came face to face with the skinny green monkeys which were imported onto the island and now outnumber the people. They are extremely destructive and come down out of the hills, take bites out of crops and go back into the hills after this destruction. 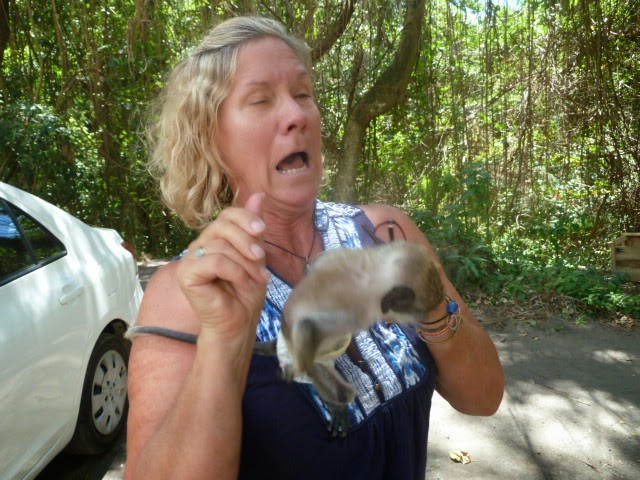 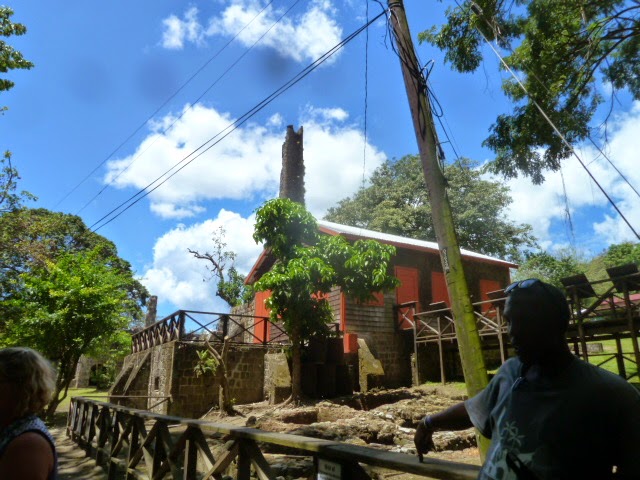 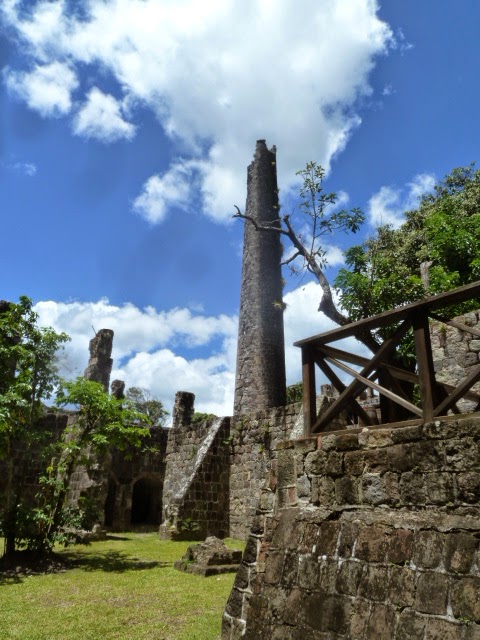 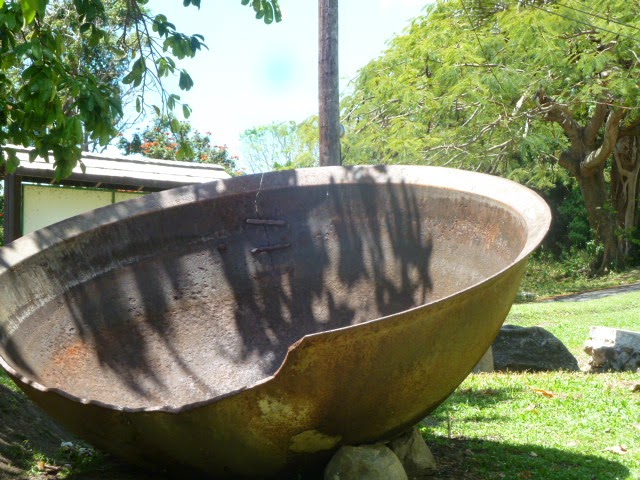 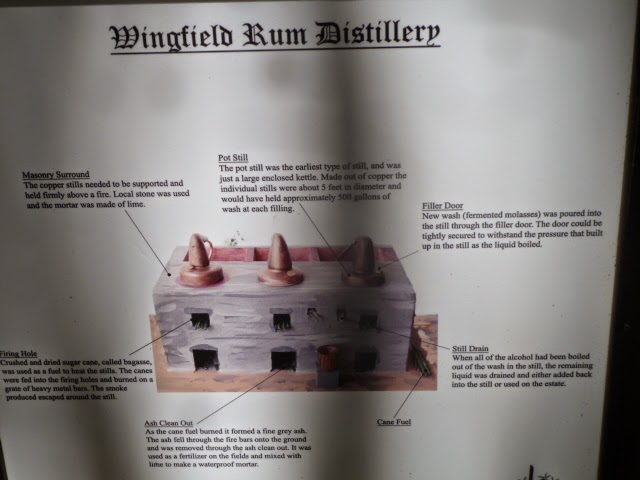 We also checked out the Carabelle Batik factory, saw the lengthy process it takes to make a single piece of beautifully coloured cloth pictures, toured the beautiful gardens and I bought 2 cushion covers and Meg bought a gorgeous dress.    ﻿


A couple of cold Carib beers at the dockside bar and good internet is always on the list. Our last jaunt of the day was down to Frigate Bay and the Shiggity Shack for dinner and sunset at the beach.
The "Green Flash" is a seldom seen flash of green that happens just as the last bit of the sun dips into the ocean. I've watched and watched, trying to catch this phenomenon, but usually there is an island or a cloud in the way.
Tonight we saw it for the first time and actually photographed it. Meg and I jumped for glee, we finally confirmed it really does happen. 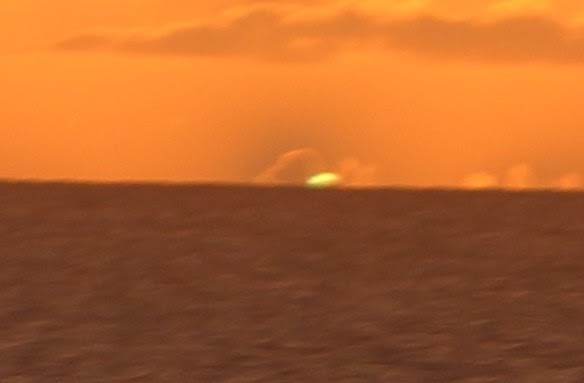 Basseterre is another rolly anchorage, so early morning we headed south to White House Bay, a calmer, more protected anchorage. ﻿

The snorkelling was great, the beach bar was mega expensive as it was part of a new Marina 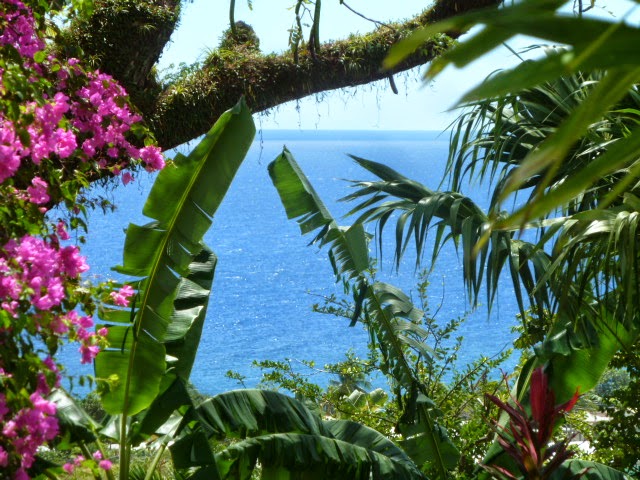 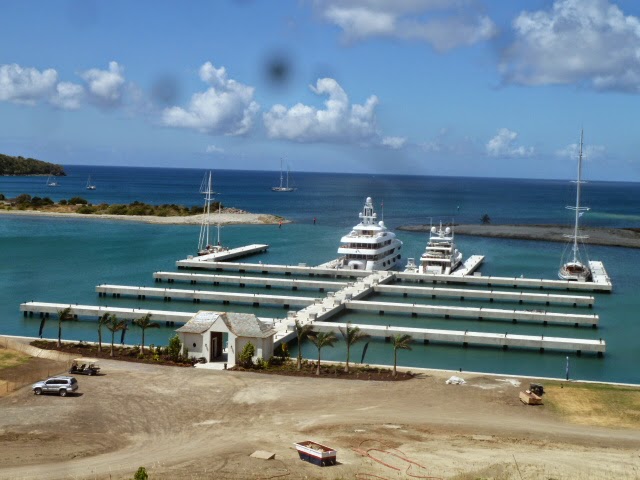 development for the very rich and their mega yachts. We walked over to the sales office to check it out and Gord hit it off with the salesman, who offered us a tour the next day, trying very hard to sell us a hillside lot with a view of Sandy Bay on the Altantic side﻿
and a view of the new marina and Ballast Bay on the Caribbean side﻿
where they have opened up the salt pond and are developing it into a fabulous marina, housing site.﻿

Price tag $975,000.00, claiming it was a perfect spot for us to build our million dollar home. Then he swept us off to the private clubhouse and treated us to a lobster lunch and a low pressure, but insistent pitch about buying side by side lots and how convenient it would be to keep our yachts in the marina, which is an incredible hurricane hole. ﻿


The facilities were incredible and IF I had an extra couple of million laying around, I'd be tempted for the investment potential alone. ﻿

He's waiting to hear from us on which lots we have settled on.
Me thinks it will be a very long wait! But will check our Lottery numbers when we return.

Now its off to St Kitts sister Island of Nevis