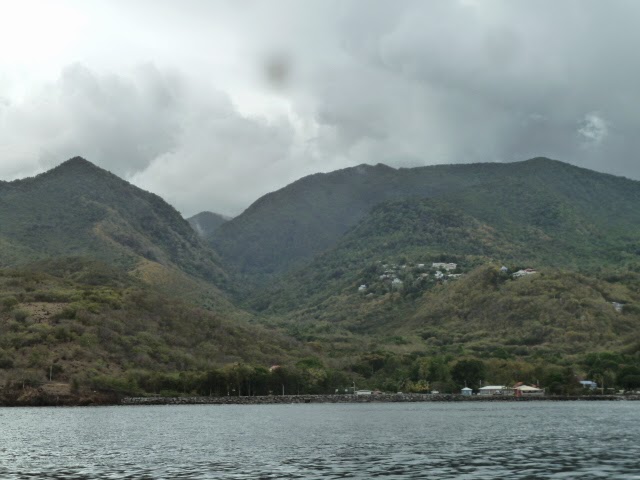 The passage to Guadaloupe was just over 35 miles from Montserrat but the seas that were supposed to be calm and about 3 to 4 ft, were considerably higher and bumpier than expected and took 8 hours. Guadaloupe is a French island , and it was evident  the minute we entered the harbour. Crowded and Close. But we're here, anchored close, and it's not an option to turn around and go back. ﻿ We're in Deshaie harbour and it has a very distinct French flavour, starting with the shop and restaurant owners that either can't or won't speak any English. 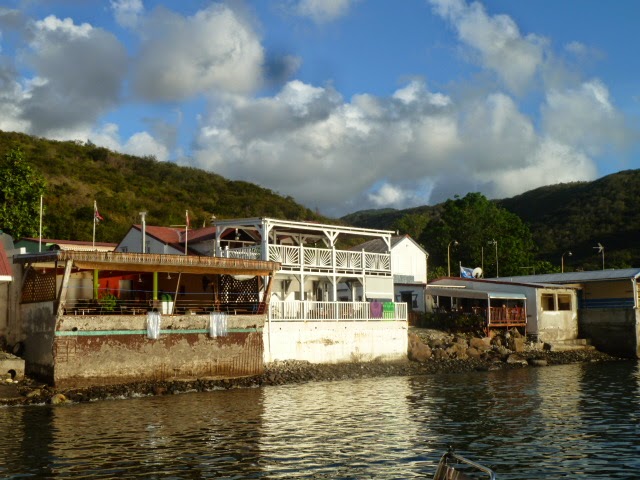 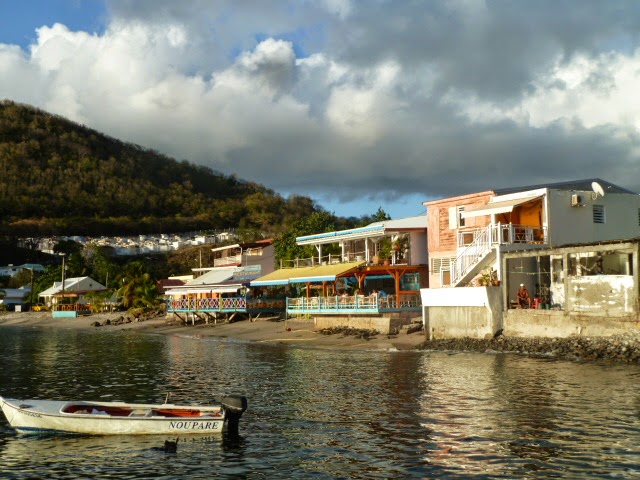 The streets are narrow, the cars are very European and shiny new and the restaurants line the waterfront and surrounding streets. ﻿
The harbour at DesHaie offers mooring balls, but they are so close together that only small boats can hook up and then everyone else is just way too close and so they put out very little scope on their chain and of course the worry is if you drag anchor into the boat behind or beside.  We put out our usual 150 ft , but the french boat beside us put out only 60 ft. In the night we swung so close, their bow passed just feet from our stern, once dawn broke everyone got nervous, we were too close to the french boat and  Tom & Megs we too close to the rocks, we decided to just get out of there. perhaps the next harbour will be better. ﻿
However, our windlass . ( for pulling up the anchor) decided it was time for a holiday as well and after pulling up about 50 of our 150 ft, just quit. Luckily Tom raced over in his dinghy and the guys pulled the anchor up by hand, while I tried my darndest to keep us from hitting the french boat or crashing on the rocks ( which we were only inches away from)
Finally we made our way out of there, headed for Pigeon Island and the Jacque Cousteau underwater park. It rained all the way down the coast and the fog was as dense as pea soup.. We dropped the hook at Pigeon Island, had lunch and got underway again, it was just too overcast to get a decent snorkel.   We arrived in Basse Terre a few hours later and dropped the hook in 32 ft of water off a totally black sand beach.  Tom & Meg headed directly into the very tight marina for fuel and water. ﻿


The frenchies were very rude and one little french girl insulted Meg over her lack of French language skills. The icing on the cake for what was a very stressful day. We had dinner aboard and played some Euchre.
In the morning we walked into the town, picked up some amazing baguettes and croissants and some fresh veggies. Gord did several runs to the fuel dock with jugs for fuel as the marina manoeuvring room was way too tight for us. We invited the neighbouring boat, Steve and Natasha on Turning Point over for happy hour. ﻿

Its weird how you get a different perspective on your boat from someone else's cockpit.
Steve looked over, admiring his boat and immediately saw that the radar was just hanging by a thread, fast exit, bosuns chair out and up the mast he went. the bracket, only a few months old had broken in 2.  The Radar was remove and stowed and happy hour continued. ﻿
﻿
﻿﻿

We walked around the marina which had a weird configuration of restaurants, all the tables together, but separate kitchens and menus for about 6 different  restaurants up against the wall. sort of a high end, gourmet, french , food court. A couple of guys gave Meg and I a hug and redeemed the French in Megs eyes.
﻿

Tomorrows plan was to rent a car and see the island. ﻿
﻿

But,
The Rock and Roll all night long was so bad we ended up sleeping sideways on the bed. Got out of bed exhausted and exited that harbour without our car tour and instead headed for Isle de Saintes
﻿
﻿