CulebraA sleepy little island , reminiscent of what we all think of as a small Caribbean Island. Friendly, safe and it seems that they roll the streets up by 8pm. Not the kind of island to go to, to party the night away, that just doesn’t happen in Culebra. We made our own party by buddy boating with Meg, Tom, Maggie and Anne on Jewell of Paradise.

As we cruised around the tip of the island , someone was out for a stroll.... across the water no less.
﻿
﻿


Beach Bums
We rented a jeep to tour the island. Figured a half day rental should do the trick and it was on and off rainy with huge black clouds. So a great day for a tour. Zoni beach was a favorite, the surf was crashing in onto a pure white sand beach that seemed to stretch for miles. Some figured no one would be out walking so they were having their own little party. Hence the name “ Beach Bums”.

The coconuts were just dropping at our feet, so we lugged a few home to try our hand at drink creation. The snorkeling off the point near Luis Pena was fabulous.


Just the opposite of Culebra, Vieques is loud , noisy and busy. Our first night out we visited the Bio Luminescent Bay and kayaked through the photocells. It was absolutely magical to watch the glowing fish as they darted around our kayaks. Although they do not allow swimming, there is the odd person that “falls overboard” and sure enough one girl decided she would go for a swim. After hearing that there was a shark attack last year we decided that we would stay in our kayaks.

It’s kind of a one horse town, with the entertainment of the evening being some young Viequean guy on his horse, trotting down the main street or tying up for a drink or dinner. 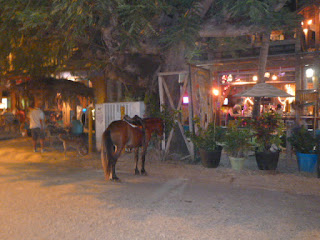 However it is a 2 gas station island, and both gas stations are side by side on the other side of the island at Isabella. Don’t let that tank get below a quarter!

The beaches were great on Vieques, and one of them is pure black, magnetic and deserted. Sun Bay was a favorite with a huge stretch of sand and the strangest beach chairs I’ve ever seen. 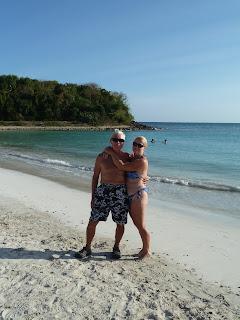 The year of the Dinghy raised it’s ugly head again as we were dinghying out around a small island into Sun Bay for the beach. Out into the open Ocean it just quit. Try paddling a dinghy… not the easiest. At least the boat happened to be downwind so we had the assistance of the wind and the waves to get us back to Ocean Wings.

We debated whether to go on to St Croix, as Tom & Meg headed back to St Thomas to drop the girls off, and St Croix is reputed to be a kind of unsafe place to hang out. And with the Refinery closing there will be lots of unemployment and the crime will definitely get worse. However, we are careful and should see it now before any change takes place, so out we head.

It was a great trip over until we hit the mouth of Christiansted harbour and our engine decided it had had enough travel and promptly shut down. After several tries to restart her and the reef looming ever closer on our starboard side, we decided it was time to call for help. Bill at Sea Tow answered instantly and was there in a flash to give us our very first tow.

﻿﻿ ﻿﻿
Casey at st Croix marina was fabulous, he discovered that our filters were blocked from all the floating sea weed we had encountered on the way over. New filters, an engine flush and we were good to go. So, we think we’ll get him to look at that damn outboard as well.

Meg and Tom arrived back to join us , just as we finished the repairs.

Christiansted is a beautiful old Danish town, with the most colourful Buildings we’ve seen so far, including a huge yellow fort that guards the harbour. The harbour itself is rolly and even though the reef is huge that surrounds the bay, it does face north and has not much protection from the sea. We are luck and it is relatively calm.

Bill at SeaTow is a busy guy, as the next day we watched from our deck as he towed a runaway boat off the reef and towed it back to shore.

We rented a car here as well, so we could see the island. Fredricksted was very pretty with a wonderful waterfront walkway and calmer anchorage due to it’s south side location. However the town is more than half boarded up and closed. St Croix is bigger than St Thomas and boasts 3 golf courses, a casino, mini golf and a multitude of diving spots as well as home to the beer drinking pigs. ( I do mean real pigs)

Our trip to Buck Island to snorkel was a bit of a disaster. We went in Tom & Megs boat with Nancy and Bob ( friends of T& M along). It rained all the way there and their cockpit is open , so everyone was cold and wet by the time we arrived, so the first thing we did was brew a hot cup of coffee. The snorkeling looked awesome but today was too rough and Bob , who was seasick wouldn’t get in the water. Nancy drank half the bay and threw up all the way back.

There's a great Hardware store here and we finally found a wonderful double hammock for the bow of the boat. Now we get to relax with a cool one and watch the sun set. 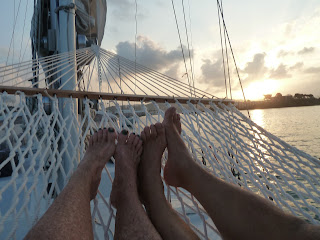