On our Own Again

Well, were off exploring the north side of St Thomas, as yet uncharted territory for Ocean Wings. As we head out of Lindburgh after another rolly, rolly night. We’re determined to find an anchorage that is calm enough to give us a good, steady nights sleep.

The winds are about 12 kts from the ESE, so the first bay to check out is Botany Bay/Sandy Bay. Heading west we have to go out past the point before we can cut thru to round the point of the island and back into Botany.

I guess the fish like a little respite from the wind and waves as well, on the reef between the islands there is a whale frolicking in the surf. He surfaces and blows, flips his tail around and repeats the routine over and over. Unfortunately he was too far away for any good pics, so you’ll just have to take my word for how precious that was.

Into Botany and it’s a no go as it is not a deep enough bay to keep the rollers out, and that is the goal. No Rollers. So back to charts and lets check out Santa Maria Bay. Just another along and we slip into the far south end of Santa Maria into 20 ft of water in front of a white sand beach fringed with palm trees, and guess what? We’re the only boat and we have a deserted beach to ourselves.

It’s like a little piece of the south Pacific and so we drop the hook in 20 ft of clear blue water in front of the sand beach. The sleeping was calm, with only a few turns and sways. So we stayed 2 nights and swam, snorkeled and sat out on the deck and watched the stars in absolute complete solitude.
﻿
﻿
﻿
﻿

The snorkeling on the east side of the bay was really great with huge hollow coral shelves and deep crevaces, you could swim between and beneath the coral chasing the fish and a few very shy lobsters.

Now it’s up the anchor and go check out Megans Bay, which is rated as one of the top ten beaches in the world. It’s a long deeply indented bay with a gorgeous powder white sand beach circling the whole end of the bay. It definitely lives up to it’s reputation. Why are there so few boats here enjoying this paradise? ( just 2 other sailboats in the bay) However it may be because there are lots of people on the beach. It’s a park with showers, bars, snack stands, boutique and water toy rentals. The cruise ships cab their guests here by the hundreds. But it’s a big beach with room for everyone. The bar has a unique service where the waitresses in their bikinis serve drinks to you right out in the water and the nice news is the park closes by 6pm and the cruise guests leave by 4pm. After that the sunsets and long stretch of beach are all ours.
﻿﻿﻿﻿﻿﻿﻿﻿﻿﻿﻿﻿﻿﻿﻿﻿﻿﻿﻿﻿﻿﻿﻿﻿﻿﻿﻿﻿﻿﻿﻿﻿﻿﻿﻿﻿﻿
﻿﻿﻿﻿﻿﻿﻿﻿﻿﻿﻿﻿﻿﻿﻿﻿﻿﻿﻿﻿﻿ We discovered a private beach, nearer to our boat, with the same white powder sand, separated from the the main beach by about a 1/2 mile of rocks and boulders. We parked our new beach chairs and broke open the beer and novels. A couple of other people arrived  and set up their spot for the day. Next thing we realized they had shed all their clothes and were lying on the sand naked. The next few arrivals did the same.
What way Do You Look??

We packed up and did a hasty retreat. Found out later from Lisa, a great local lady we met on the beach that it is indeed a nude beach and also known to be a gay nude beach.
I guess it's the big beach from now on.

Off our little " private Beach" we discovered the wreck of what used to be a large sailboat in about 15 ft of water. Fairly recently sunk ( maybe last years hurricane) you can still tell it was white with a blue stripe.  Our first wreck dive.

As the sun was setting, we set out in the dinghy with fishing rods and trolled along the shoreline for a couple of evenings. We caught one small silver fish, which Gord ate for dinner. I prefer not to eat mystery fish. So unless I know exactly what it is, and we didn’t. I prefer to pass. 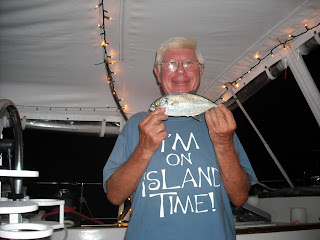 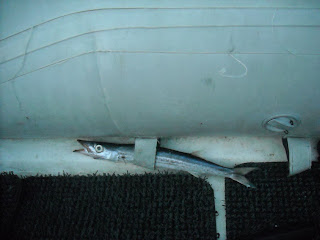 We'd parked the dinghy on the beach a few days later and I said to Gord that that one little fish had left the dinghy pretty stinky and in need of cleaning. As we emptied out all our stuff, there to our surprise was a very stiff, very dead flying fish about a foot long, tucked into the edge of the dinghy under the velcro tab that holds the oars.  He must have flown in the day before and couldn't get out. We laughed and laughed, they wouldn't take the lure, but prefered to jump aboard all on their own.  Mystery of the stink solved.
We miss everyone at home and would love to call home more often, but that's difficult from down here. You might say " good phone connections are hard to find"