Hung out at the bar at Emerald beach so we could catch some tunes from Skunky Ron. Great 50,s 60,s 70,s 80,s etc.
There are tons of stories how skunky got his name. Some say it's got to do with smell, his that is, following a particularity potent dinner that didn't quite agree; others claim it's a style of music, still others that it's just bad b.o.  Truth is it was following a particularly stress time following a divorce and death and overnight a white stripe appeared in in his hair.  The hairs all white now , but the name stuck.
By the way skunky got married on the beach today to a great gal that confirmed it had nothing to do with odors. 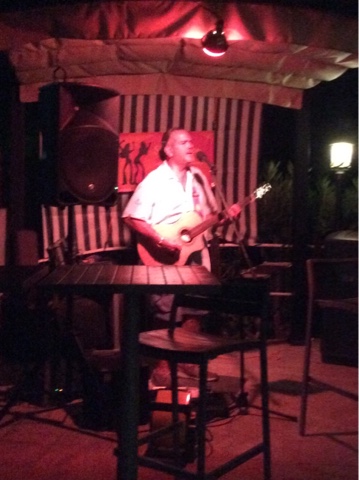 Older Post Home
Subscribe to: Post Comments (Atom)
Sailboat owners Gord and Sue aboard their 55' Whitby Ketch "Ocean Wings" share their adventures and travels as they start their retirement, living their dream of seeing the world from oceanside.
Ocean Wings is a recent purchase and our first foray into the Sailing Lifestyle. We're excited and a little scared. Join us in our adventure.